The CUUATS PPR Guidelines are currently under revision to reflect the goals and objectives of the LRTP 2045, approved in December 2019.

STPU/STBGP funds are documented and recorded in the Transportation Improvement Program (TIP). The purpose of the TIP is to publicly document proposed transportation projects for a four-year fiscal period so that project funding can be secured. Any local project that uses federal or state monies must be in the TIP in order to be considered for such funding.

The CUUATS Project Priority Review Working Group is comprised of CUUATS staff, and representatives of CUUATS member agencies and has been meeting periodically since 1995 or earlier. In 2001, the CUUATS Project Priority Review Working Group created the first “Project Assessment Guidelines” for the Champaign-Urbana MPO in an attempt to create an objective system to prioritize projects applying for STPU funds. Criteria for highway projects were developed and weighted according to a methodology created by CUUATS staff. The 2001 guidelines focused on regional and local priorities and evaluated future roadway safety using Selected Crash Intersection Locations (SCIL) criteria approved by the Champaign Urbana Traffic Engineering Committee (CUTEC).

In 2008 the CUUATS PPR Working Group and CUUATS Technical and Policy Committees approved a revised version of the Project Assessment Guidelines that incorporated new federal regulations (SAFETEA-LU, passed in 2005) as well as the priorities established in the Long Range Transportation Plan for 2025 that was approved in 2004 and updated in 2007 (after the adoption of SAFETEA-LU). Security was introduced as a project criteria and the safety analysis was updated to be consistent with the Illinois Department of Transportation (IDOT) Comprehensive Highway Safety Plan. In addition, the newly created CUUATS Travel Demand Model allowed for the inclusion of forecasted average daily traffic (ADT) as a project evaluation tool.

This update in 2016 incorporates new federal transportation legislation [Moving Ahead for Progress in the 21st Century (MAP-21), passed in 2012 and Fixing America’s Surface Transportation Act (FAST Act), passed in 2016] and a new LRTP for the region (Sustainable Choices 2040, approved in 2014).

The FAST Act preserves the system of transportation investment performance measures put in place in 2012 with Moving Ahead for Progress in the 21st Century (MAP-21) and represents the first comprehensive surface transportation legislation since SAFETEA-LU was passed in 2005. “The FAST Act converts the long-standing Surface Transportation Program into the Surface Transportation Block Grant Program acknowledging that this program has the most flexible eligibilities among all Federal-aid highway programs. [FAST Act § 1109(a)]. The STBG promotes flexibility in State and local transportation decisions and provides flexible funding to best address State and local transportation needs,” (FHWA FAST Act Fact Sheet, 2016). One significant change from previous legislation is the FAST Act’s emphasis on freight investments including a new National Multimodal Freight Policy. 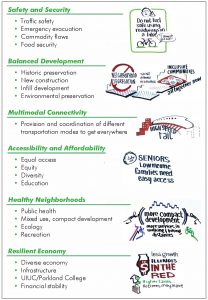 The 2040 LRTP goals, objectives, and performance measures are based on six overarching Planning Pillars that summarize and organize the results of extensive research and data collection (LRTP chapters 2-7), an ambitious and innovative public outreach campaign (LRTP Appendix A), and the CUUATS annual LRTP Report Cards that track the goals and objectives set forth in the previous LRTP, Choices 2035, approved in 2009. The LRTP 2040 Planning Pillars are listed below including graphics drawn during LRTP visioning meetings held around the Champaign-Urbana area in 2013.

The first application prerequisite comes from federal legislation while the last five are a result of agreement among the CUUATS PPR Working Group regarding the use of local STPU/STBGP funds: 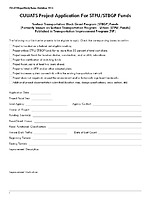 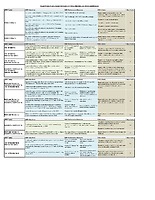 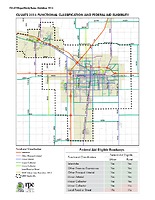 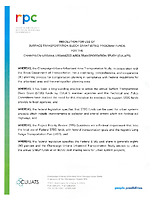 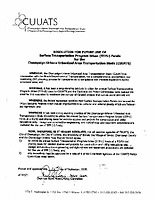 CUUATS Resolution for Future Use of STPU Funds, 1999 PDF 39 KB 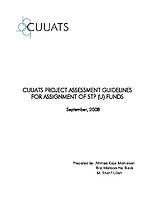